Lord Selkirk Park Child Care Centre opened in February of 2012; located in the heart of Winnipeg’s North End, the centre serves the families of the Lord Selkirk Park Housing Development. The centre has spaces for 47 children (9 children under the age of 2, 23 2 – 5 year olds, and 15 6 – 12 year olds). LSPCCC is part of the community organization Manidoo Gi Miini Gonaan (The Great Spirit is Giving), whose vision is “To be a model organization which serves to promote high quality child care programs, resources and services which supports the development of children, families and individuals to reach their potential by walking alongside their life journey. We recognize their gifts and right to be valued, respected and included.”

Staff at LSPCCC implement the Abecedarian Approach, making children’s language development the first priority of the program. Each child has a primary caregiver attached to them, who is responsible for designing an individualized program tailored to meet the child's needs, interests, and skills. Watch the following clip to see how a caregiver intentionally fosters a child's language development.

The following photos show a simple, short interaction between a caregiver and child; as the child successfully zips up her jacket, the caregiver provides encouragement and support, fostering the child’s confidence and capabilities. 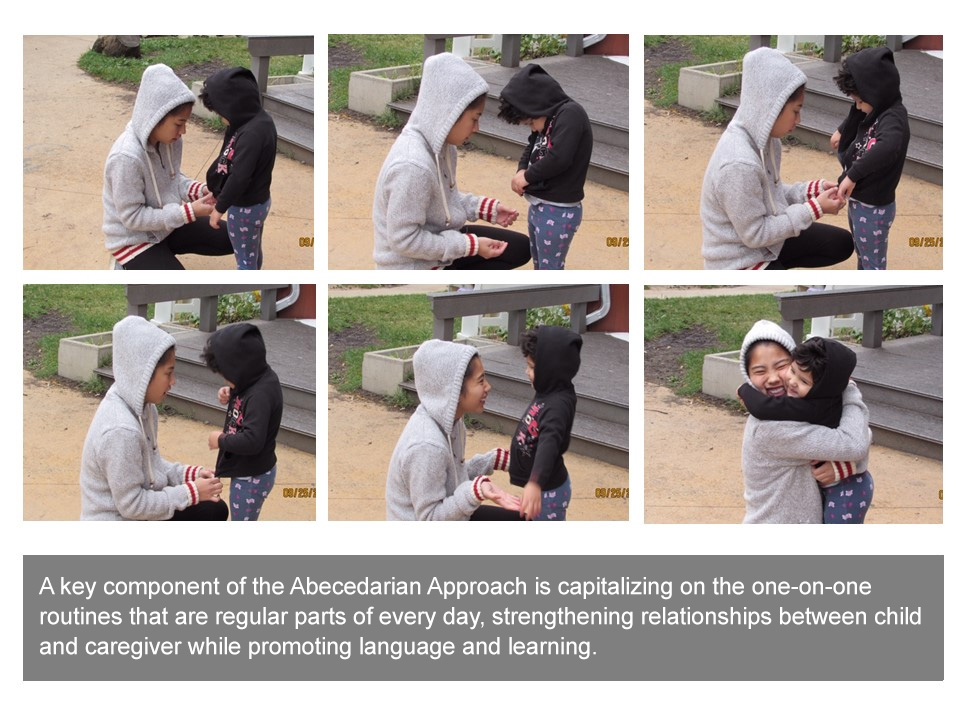 When LSPCCC opened in 2012, it became the first child care centre in Canada to implement the Abecedarian Approach. In order to determine if the Approach would have the same level of impact in the Canadian context as it had elsewhere, the Lord Selkirk Park Child Care Centre Abecedarian Evaluation, funded by Healthy Child Manitoba, was built in right from the beginning. The evaluation, exploring the impact of the Abecedarian Approach on children’s language development, was a partnership between Healthy Child Manitoba, Manidoo Gi-Miini Gonaan, and Red River College.

In addition to Abecedarian programming, LSPCCC was funded to provide children with lunch and 2 snacks every day, along with Omega 3 vitamin supplements. The centre had an enhanced adult to child ratio, allowing more individualized attention for each child. Parents received child care subsidies from the government regardless of whether or not they met the current subsidy requirements, so there was less likelihood of children withdrawing from the study due to financial issues.

A home visitor worked with families in the treatment group, guiding them in using Abecedarian strategies at home. At their request, the home visitor began running Abecedarian workshops for parents, deepening their understanding of the Abecedarian Approach and strategies while connecting with one another. The home visitor also supported families during challenging life situations such as legal struggles, family breakups, navigating the medical system, and even births and deaths. She focused on helping the families feel empowered to speak up and advocate on their own behalf.

Carly Sass, LSPCCC's home visitor, describes how she works with parents in the following video clip.

Dr. Joseph Sparling, one of the founders of the Abecedarian Approach, provided the initial training for the staff of Lord Selkirk Park Child Care Centre in 2012. In the following video clip, listen to his comments on the project at that time.

Following the training, Red River College provided additional support through mentoring and coaching for the staff at the child care centre, maintaining a focus on relationships and trust, as well as attentiveness to the intervention strategies and program content. New staff received Abecedarian Approach training and mentoring from Red River College. 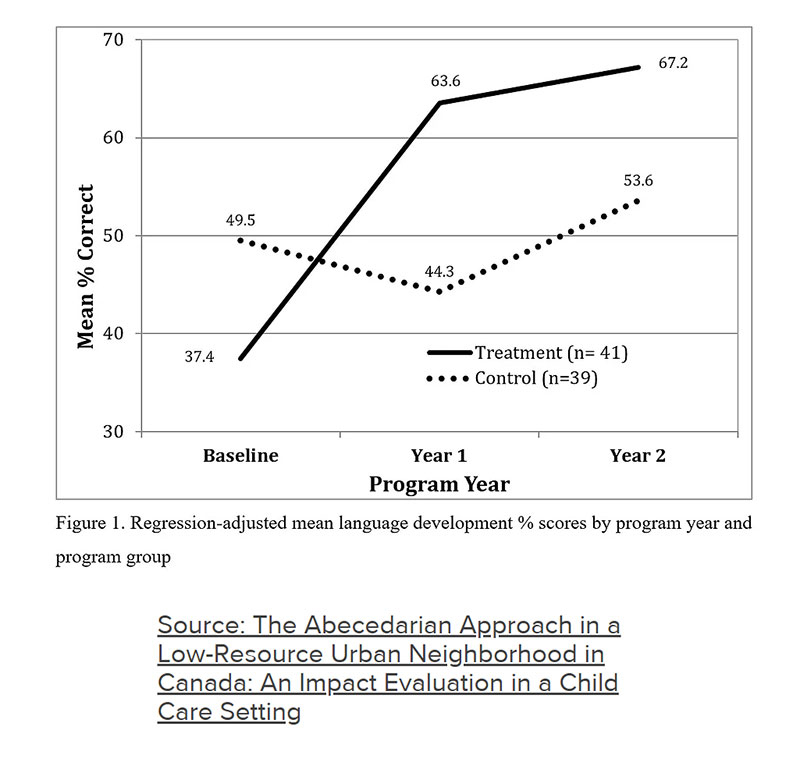 HCMO arranged to conduct annual language development assessments for each child up to the age of 5, using the Brigance Inventory of Early Development. The Brigance assessments showed a statistically significant increase in program group children’s language scores, as compared to the language scores of the control group children, over the first two years. At the end of the first year, participating children had made considerable gains in their early language development. Although smaller, they also made gains in the second year. The graph to the right illustrates that, over time, the treatment group, although starting with lower scores than the control group, maintained a language advantage across both years of participation in the program.

HCMO also made special arrangements with the children’s schools to conduct EDI assessments for each child during their Kindergarten year. Preliminary analysis of Early Development Instrument (EDI) data from children who entered Kindergarten from 2013 up to and including 2017 found promising results for program group children compared to control group children on early literacy.

Tim Cox is the principal of the elementary school located next to LSPCCC. Listen as he describes the school population and the importance of supporting and building on the early experiences of children that foster school readiness.

Now listen to the Kindergarten teacher describe what she noted about the children who attended LSPCCC when they entered her classroom.

The LSPCCC Abecedarian Evaluation will continue to assess the remaining children until the last ones enter kindergarten in 2020; at that time, all of the EDIs will be complete and further follow up may be considered. The Lord Selkirk Park Child Care Centre continues to implement the Abecedarian Approach with the existing supports in place.